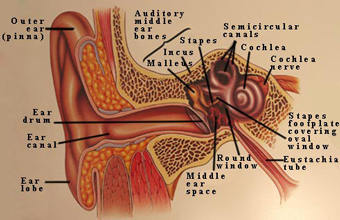 Acute otitis media is an infection of the middle ear, which is the normally aerated portion of the ear behind the eardrum. Eustachian tube dysfunction, or inadequate functioning of the tube extending from the back of the nose to the middle ear, is a common contributor to the development of middle ear infection. Illnesses which obstruct the eustachian tube include viral or bacterial upper respiratory infections, sinusitis or allergies. Otitis media is more common in children, but may also occur in adults. Symptoms may include earache, fever or dizziness. A child may be fussy or pull on his or her ears. Treatment initially may include antibiotics and decongestants. With frequent recurrence of these infections, placement of myringotomy tubes, also known as ventilation tubes, pressure equalization tubes, or "ear tubes," is sometimes necessary. Another common reason for the placement of such tubes includes an extended bout of serous otitis media, (also known as a middle ear effusion) which is the retention of non-infected fluid behind the eardrum. Such fluid can lead to hearing loss, delays in speech development or imbalance.